One hot July day, I joined my friend and her husband for lunch. After a very filling meal, we decided to continue celebrating at various local attractions. Her husband did not want to let his leftovers go to waste so he packed them up and kept them in the hot car while we continued our day together.

Maybe you have never done something like this, but maybe you know someone who has eaten a party dip that has been sitting out for six hours or snacked on leftover pizza that was left on the counter overnight?

So often people think it won’t happen to them or that they’ll know when to avoid a food or drink that would make them sick. However, most of the time, food poisoning or foodborne illness is undetectable by the nose, eyes or even taste buds.

If you’ve ever had food poisoning, you know it’s not just a “little ole bug.” Foodborne illness can cause a variety of (sometimes intense) symptoms and vary in duration. Below are the most common food-borne illnesses in the United States, their symptoms and their common sources:

So how do you protect yourself? By keeping FAT TOM out of the Danger Zone. No, no, no, we’re not talking about Tom Cruise in Top Gun. Wrong Tom. Wrong Danger Zone. FAT TOM is an acronym that helps remind us which conditions most support harmful bacteria growth in our foods. 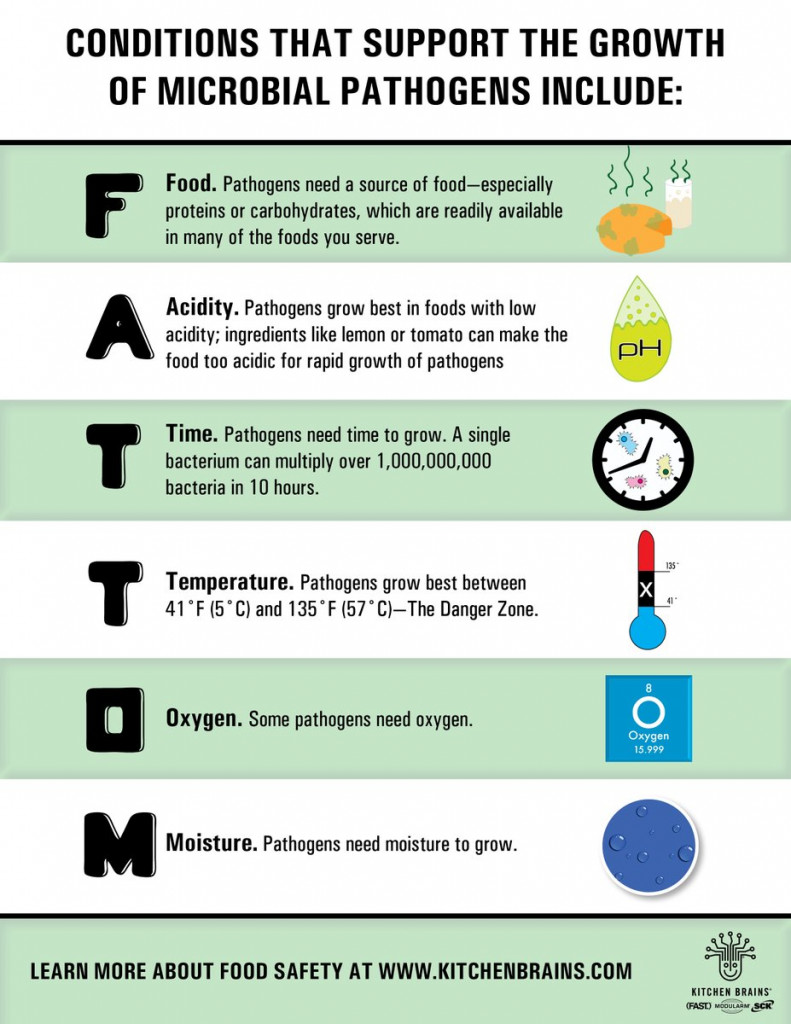 The food danger zone is between 41 and 135°F, and this is where that bacteria grows quickest. Couple this zone with any of the conditions above and you literally have a recipe for disaster. To my friend’s husband’s demise, his food storage that summer day actually made an incubator for bacteria. Estimates show that an hour in a car on a 90 degree day will create an internal temperature of 135°F 3, the perfect temperature for bacteria to multiple like weeds in an unkempt garden.

All foods should be cooked to an appropriate temperature.

Leftovers need to be refrigerated within two hours and not out of the refrigerator for any longer than four hours total. When reheating, be sure foods reach an internal temperature of 165°F.

I never heard him complain of food poisoning from those leftovers, but it’s not a risk worth taking, especially if you’re a higher risk individual – such as a child, pregnant woman, elderly person or someone with a compromised immune system due to a condition or medication.

As the fall begins and the holidays approach, there will be a copious amount of potlucks and parties filled with platters of all sorts of foods oftentimes that could be brewing with harmful bacteria.

For more information about what the FDA is currently doing to prevent foodborne illness outbreaks, check out the final ruling on the Food Safety Modernization Act